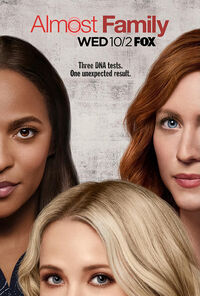 Almost Family is an American television series that premiered on Fox in 2019. It is directed by Leslye Headland.

An only child (Brittany Snow, the "Pitch Perfect" franchise, "Crazy Ex-Girlfriend") finds her life turned upside down when her father (Academy Award winner Timothy Hutton, "American Crime," "Ordinary People") reveals that, over the course of his prize-winning career as a pioneering fertility doctor, he used his own sperm to conceive upwards of a hundred children, including two new sisters (Megalyn Echikunwoke, "The Following," "90210," and Emily Osment, "The Kominsky Method," "Young & Hungry"). As these three young women slowly embrace their new reality, they will attempt to form an untraditional bond as sisters, even as they must welcome a tidal wave of new siblings into their rapidly expanding family.[1]

The series is executive produced by Jason Katims, Jeni Mulein, Imogen Banks, Sharon Levy, Leslye Headland and Annie Weisman. Universal Television and Fox Entertainment are involved in the production of the series.

Retrieved from "https://almost-family.fandom.com/wiki/Almost_Family?oldid=338"
Community content is available under CC-BY-SA unless otherwise noted.